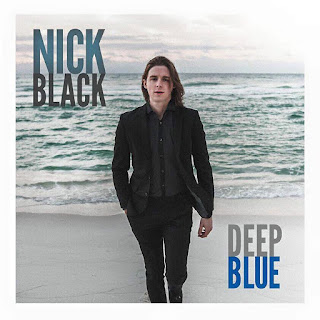 Are you in the mood for some smooth music? Do you feel like dressing up in a classy suit and put on that Frank Sinatra hat you forgot you had? Then here´s the soundtrack for you.
Memphis, Tennessee based artist Nick Black is not to be confused with the California rocker by the same name, because this guy puts his heart in late 70´s soul, funk and even west coast on his second album "Deep blue".
Soundwise, Nick Black comes from the same neighborhood as Michael Ruff, Billy Ocean and Hall and Oates. But there are two Swedish names that comes to mind in the album opener "Ocean" and they are Eric Gadd and Salem Al Fakir, how very charming.
The track "Let´s be glad" invites the listener to some cool Motown soul while "Only one man" sounds like a song from a 70´s American crime drama TV series.
Just close your eyes to his passionate vocalperformance in the ballad "Don´t leave Louise" or get carried away to the bluesy "All over again", no doubt this album is well performed and 100% honest.
I might not be the biggest fan of soul music on this planet but good music is always good music.
Highlights : Don´t leave Louise, Ocean, The worst you can do