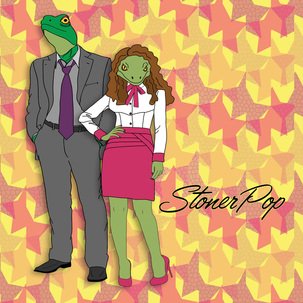 StonerPop is a two-piece electro-pop act hailing from Louisiana featuring Maudie Michelle - Vocals/Instruments and Jimmie Manueva - Instruments.
The music is quirky, ambient and sometimes a lovely flirt with 80´s synth-pop. "Preachers" opens the EP, imagine if Brian Eno teamed up with B52´s and had a lot of fun in the studio, then you would get "Preachers".
If Devo had a female singer the result could very well be the 2nd track "Running", it´s a cool song.
"You´re never listening" can be described as a computerized quasi-punk song close to The Stranglers 80´s albums, the synthesizer sounds can almost be used as audio torture.....they´re inside my head.....take em away!!!!
Hahaha, no worries.
The last track "Fox" sounds like a possible collaboration between Moby and Massive Attack. It´s a bit different compared to the other songs but I like the groove.
It wasn´t easy to get into this EP but I like StonerPop´s experimental side.
Upplagd av RothNRoll kl. 7:48 PM