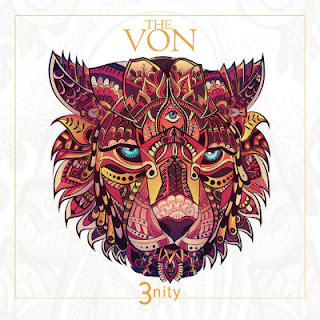 The Von - 3nity (2016) The Machine Records
Produced by Luis Bonilla
ROCK
Tracks : 1.I know it´s love 2.Nature of the beast 3.My heart machine
www.facebook.com/TheVon4U
3 out of 5

Oh man, I find traces of several genres in The Von´s new EP "3nity". The South Florida based trio has recorded 3 songs that takes the listener through a varied soundscape of new wave, prog, 90´s rock and gothic sounds.
You might think it´s a shattered affair, well it certainly looks that way but The Von manages to hold it together in a respectable way.
The opening track "I know it´s love" is the weakest out of these 3 songs but it´s not bad, just ok. The song is a blend of 80´s rock a la Big Country and the Aussie rock of Noiseworks. It doesn´t look that bad on paper but the vocal melody won´t receive any award from me I´m afraid.
The 2nd track "Nature of the beast" sounds more like the child of Queens of The Stone Age and early Muse, this one´s better and I really dig the bass in this song.
Now to the best song on the EP which is "My heart machine", the intro bring thoughts to Rush while the rest of the song could´ve been something Carfax Abbey had written. The gothrock-ish vibes I get from this one is super.
Luis Bonilla - Lead Vocals/Bass, Marek Schneider - Guitars and Elisa Seda - Drums released their debut album "Ei8ht" in 2015 if you feel like checking out the band even more.