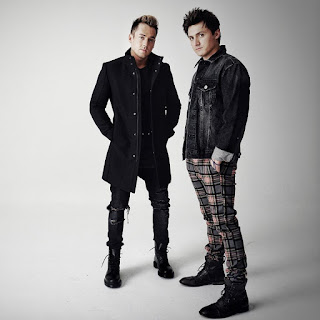 Debuting in August 2017 with their single "Heartless," and quickly racking up over three million streams on Spotify. SiriusXM hits 1 chosen emerging artists, JBL’s newest pop/rock endorsee and recently backed by Monster energy drinks, this powerful duo has arrived!
Evaride consists of Sean Michael Murray on vocals and Hayden Maringer on guitar. Both members have had very successful individual stories in the music industry. Each of their stellar accolades ultimately led them to one another.
With the perfect combination of talent, drive, soaring vocals and rhythmic guitar riffs, it’s natural that Evaride has already garnered attention from some of the music industry’s top press and producers including (Gregg Wattenberg, Captain Cuts and Colin Brittain.) With their debut EP set to drop early 2019 and two successful singles already under their belts, there's no doubt that this band will be skyrocketing up charts nationally and internationally in 2019 and for years to come!