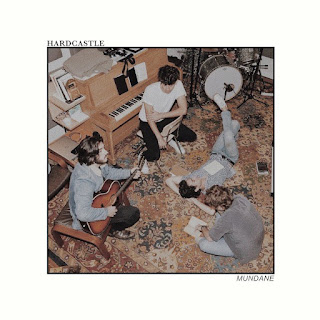 Graham and Miles Laderman have been playing music together since they could pick up an instrument. They met Val Hoyt, another lifelong musician, in Atlanta and he soon became like a brother to them. After playing together around Atlanta for about four years, the band members began their separate moves to Nashville and one by one.

While it was difficult during this process to stay connected and maintain a band 'long distance,' the necessity and yearning to play together never wavered. The connection they had made (soon to be joined by Noah Christian) was hard to rival, and knowing what each member was capable of, both with an instrument and without, made for an unmatched brotherhood.

In the fall of 2017, life changed for the band. Graham left school to focus on music full time, Miles was finally able to make the move to Nashville, and they linked up with their newest member and brother, Noah Christian. Now, with everyone in the same place and a complete lineup, Hardcastle began making a name for themselves.

Hardcastle charted on Spotify’s Viral 50 charts nationally AND globally, thanks to an amazing fan-base that they began to connect with on Twitter. They started touring numerous cities in the US, most notably with The Band Camino; they also played most recently in Knoxville at UTK's Volapalooza (with acts such as Juicy J and Zella Day). Hardcastle also continued to experience success in the Nashville area, selling out The High Watt as well as filling the Mercy Lounge.

Today, the band is tighter than it’s ever been. Graham, Miles, Val and Noah are focused on music full time, while sharing the same house in Nashville. After a summer of hard work and self-discovery, they are beginning a new chapter with the releases of ‘I Never Knew’ and ‘Invisible.’ Part of this growth involved the band re-assessing exactly who they are and the evolution of their sound.  Because of this new direction, they have decided to take down previous works from major store fronts and begin with a clean slate. A total re-set.

Hardcastle will build a name for themselves off of authentic and personal songs that have come from hours of hard work and introspection. It’s about loving the process…it's about brotherhood…it's about the shift in mentality from instant gratification and entitlement, to a love and appreciation for the songwriting, the music itself and the hard work it takes to get there. Be sure to keep up with Hardcastle’s next moves on all major social media platforms.