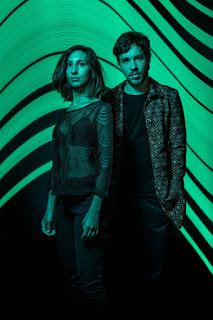 MAREY’s music takes on its full scope during these moments of intense receptivity, when the incessant swarming of human life is no longer enough to satisfy our needs for depth and sensitivity. The band is in its own way part of a movement of reaction to the musical boredom of the current highly publicized music scene.
Since 2016, the band has been constantly reinventing itself and embarking on an ever more complex and in-depth musical research. Above all, the love of creation prevails, without barriers, without taboos and without the desire to please or affiliate with a particular style. The independence and DIY aspect that the group wants to keep allows them to free themselves from codes.

With their willingness to surprise and disturb it happens that one hears influences from electronica and modern indietronica in their latest creations. Their texts and music are aimed at what is hidden deep within us and human nature. To plunge into this universe is to enter a lunatic world, between dreamlike light and gloomy coldness, between calm and violence. A macrocosm of questions rather than answers where nothing is permanent except the music and everything it contains.
Listen to the first single "Synthetic" from the upcoming album, out in 2020.
https://smarturl.it/marey