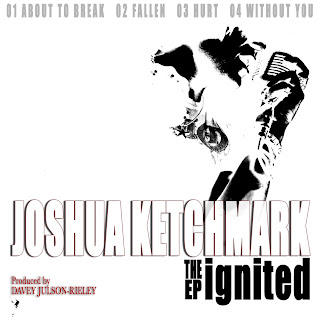 Joshua Ketchmark - The Ignited (2012) Independent
Produced by Davey Julson-Rieley
MODERN ROCK
Tracks : 1.About to break 2.Fallen 3.Hurt 4.Without you
www.facebook.com/JoshuaKetchmark
3,5 out of 5

Joshua Ketchmark´s 3rd EP in 2012 is called "The Ignited" and will be out on Oct 30th, it´s produced by Davey Julson-Rieley who has worked with Kill Hannah, Kelly Clarkson and Elvis Costello. These 4 new songs are really good and a cool blend of powerpop and modern rock, Joshua Ketchmark even takes a visit in AOR land on "Hurt". The opener "About to break" is more of a contemporary modern rock song and also perfect for active rock radio, my favorite though is the smart rock of "Without you". Such lovely harmonies in this song where my thoughts go to Ken Andrews.
Highly recommendable!