Carl Franklin - Been a while 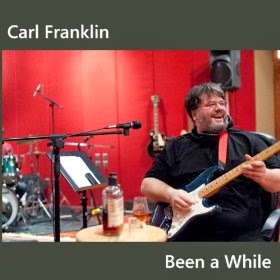 Carl Franklin - Been a while (2013) Couch Flight Music
Produced by Carl Franklin
JAZZ / FUNK
Tracks : 1.Waiting for the summer to come 2.Drive my car 3.Chain reaction 4.Boogie groove 5.False profit 6.Big butter and egg man 7.The Titanic 8.Time bomb 9.Out of your way
http://carlfranklin.com
3 out of 5

Back in the 70´s, genres like funk, westcoast and California pop were big and it was easy to sell records but it´s the other way around today. However, that doesn´t stop Carl Franklin from making the music he wants to play. He is normally a member of the Franklin Brothers but is taking the solo route with his first solo album "Been a while", -it´s all about the groove, Carl said, when he started jamming with his band to get this music party started.
The music on "Been a while" can be described as a mix between early Chicago, Average White Band and Michael Ruff. I think it´s a nice album where Carl´s jazz/pop cover of The Beatles "Drive my car" is awesome.
Guitar legend John Scofield is guesting on the fusion trip of "Chain reaction", one of the reasons you should check out this album if you´re a fan of jazz and funk.
Cool!
Upplagd av RothNRoll kl. 5:28 AM