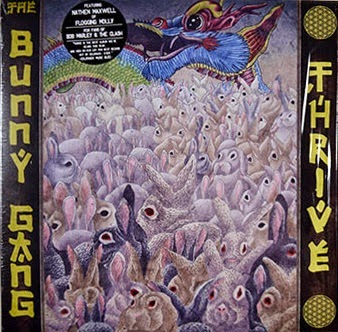 The Los Angeles based The Bunny Gang sound more British than most British bands today, it´s like turning back time to 1978 when new wave had taken over the streets and the songs on this album "Thrive" were written but locked away till now.
Led by Flogging Molly bassplayer Nathen Maxwell on Lead Vocals and Guitar, this band has created an album that has every chance of becoming a modern classic.
They are influenced by The Clash and Bob Marley which is quite obvious when you listen to "Thrive" but I would like to add artists like The Police and The Jam into the mix as well.
There ain´t a single bad track on this record, you could easily believe that it´s a Best of compilation but it´s not. The screaming guitars in the instrumental "Waves" feels so vital and only makes this band sound alive, I really love all tracks but if I´m forced to pick out 3 and I will go for "Uprise underground", "Beach coma" and "The reckoning".
Upplagd av RothNRoll kl. 10:24 PM